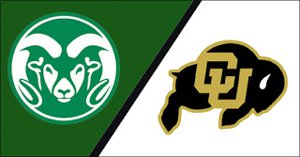 It is that time of year, football season and here in Colorado we have a rivalry that dates clear back to 1893. The Rocky Mountain Showdown is a rivalry between Colorado State University and the University of Colorado. The winner of the game receives the Centennial Cup. The first game dates back to 1893 and was played periodically until it was cemented as an annual rivalry in 1995!

Since 1998, the game has been played in Denver Colorado at the Bronco stadium, stating that this was neutral ground. In 2004, 2005, and 2009 the game was played at Folsom Field in Boulder. In 2020 the game will have the option of returning to the new stadium in Fort Collins. Since the ending of the Utah/Utah State game, the Rocky Mountain Showdown is currently the oldest rivalry in the Football Bowl Subdivision of NCAA Division I college football, between two public universities in the same state that have a game named "University of __ vs. __ State University"