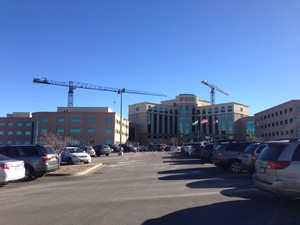 I was visiting a friend in RidgeGate last week and noticed the neighborhood is showing all the signs of heavy development - which is such a positive sign for the economy, real estate market and growth in Lone Tree and Douglas County.

The Charles Schwab campus, which will bring over 2,200 employees to Lone Tree is slated to open by the end of 2014. This construction progress combined with homes flying up in the neighborhood and the expansion of the Sky Ridge medical campus is a strong indicator.

Sky Ridge's $117 million expansion will bring an additional 300 jobs to the campus and is also slated to be completed by the end of 2014. The campus will be offering a Sally Job Breast Center, a Women's Center including NICU capability, the addition of a Neurosciences program and will be able to boast the largest birth center in the State of Colorado.

Wow!  To see five operating cranes in one place was amazing! 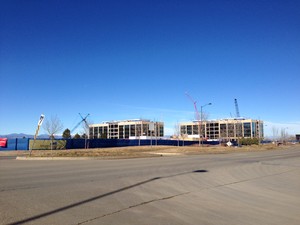