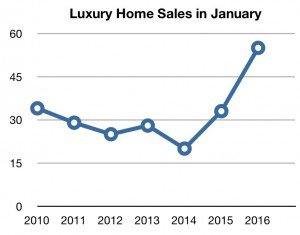 High-end home buyers scooped up 55 luxury homes in the Denver-area last month, a 66.7 percent jump from the 33 luxury home sales in January 2015, according to a report by Kentwood Real Estate.

Kentwood started tracking the sales of luxury homes (homes that sold for $1 million or more) in 2010.  Last month was the best January on record since Kentwood began tracking.

The most expensive home sold in January was in Cherry Hills Village, selling for $6.53 million.

Cherry Creek, however, was the neighborhood that showed the biggest percentage increase in sales in January.

“When comparing the average sales price from January 2015 to 2016 and noticing a 51 percent increase in residential sales and a 165.4 percent increase in condo sales, you get a snapshot of the current favorable market in this neighborhood,” Zucker continued.

Cherry Hills Village and Greenwood Village also showed a big increase in sales. Last month, there were 11 sales, up 81.3 percent from the six sales in January 2015.