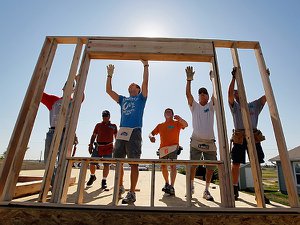 Habitat for Humanity and Goodwill Industries have opened a one-stop drop location in Highlands Ranch in an effort to increase donations and, therefore, provide more homes to people who qualify for them.

The location is convenient for people who want to drop off donations without making several stops.  The partnership is an effort to increase donations for the nonprofit organizations.  Their philosophy?  When you make things easier for people, they are more likely to do it.

Habitat for Humanity's ReStore, similar to a thrift store for homes, opened in a portion of Goodwill's building at 8585 S. Poplar Way.  The nonprofit organizations share a donation dock in the back of the building and accept everything from used clothes to windows and doors.

Their proceeds will stay separate. Goodwill helps people with intellectual and physical disabilities find employment, and Habitat for Humanity helps low-income families secure a home.  Habitat for Humanity of Metro Denver started in 1979 and has served roughly 650 families, according to Ryan Smith, chief retail officer.  The organization's goal is to “build homes, community and hope by providing stable places to live,” Smith said.